It's Water-Wise Wednesdays with Frannie the Fish! {The Water Cycle: Part 9 - Recharge}

This is the ninth and final part of Frannie’s exploration of the water cycle. Please check out her previous blog on the overview of the water cycle and her deep dives into groundwater, discharge, surface water, evaporation, condensation, precipitation, and runoff.

Welcome back to Frannie’s exploration of the water cycle! The final, red-colored bead on Frannie’s water cycle bracelet represents recharge, which is the process by which an aquifer takes in water. If you think of an aquifer like a phone battery, you know that when you use your phone, the battery gets depleted. In order to make your phone work again, you have to connect it a power source and charge it. Surface water, run off, and precipitations are kind of like power sources for an aquifer. Water seeps, or percolates, through the ground, recharging the aquifer once it reaches the water table. 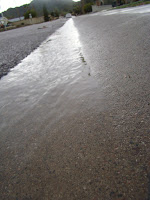 The ability of an area to perform recharge depends on many factors like the type of soil and how well it can hold water, how much rain an area receives and where it fall, how steep the hills are in an area, and climate of an area during each season. For example, if rain falls on a steep city street, it won't be able to pass the impermeable pavement and will flow quickly downhill. However, if it lands in a flat area that has a type of soil that water can pass through quite easily, the water can infiltrate the unsaturated zone to reach the water table.

Frannie learned something interesting while researching recharge. Not all water that enters the soil actually becomes recharge. Much of it is stored in the unsaturated zone and returns through the atmosphere either through evaporation or by being drawn into plants’ roots and then transpired. This is in part due to water’s stickiness superpower from the deep dive into condensation. 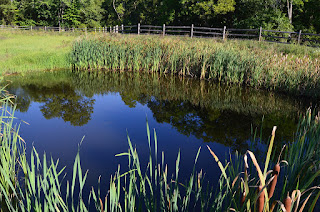 But that’s not the only way that groundwater can be recharged. Human-induced recharge is water that is put back into the ground on purpose. Wells that do this are called injection wells, but it can also be directed into spreading basins. A spreading basin is an area that holds surface water long enough for it to seep into the ground, such as a wetland or marsh.

Groundwater recharge and the processes that allow it to happen are very important to the health of an aquifer. If too little recharge occurs over an extended period of time, such as in times of extreme drought, the aquifer can shrink. The sheer weight of the land can compress the dry soils and form impermeable barriers and the aquifer will never be able to return to its previous size. This is aquifer storage loss, a concept Frannie explored while “Seeing an Aquifer in Space”. 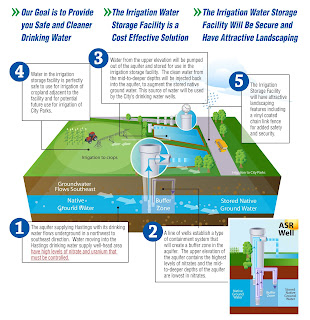 Now that our water droplet has returned to groundwater, Frannie has completed this cycle. This isn’t the only loop a water droplet can take.

Sometimes, a water droplet with travel from the surface, condense and precipitate, land on a leaf and evaporate again before it ever has the chance to touch the ground.

Sometimes, water flowing in river will exchange back and forth with the groundwater flowing beneath the riverbed.

And sometimes, water will be pumped from the ground into your house, through your faucets and toilets and shower, treated in a septic system, and eventually released back into the ground.

Thank you for traveling with Frannie on her journey through the water cycle! She learned a lot along the way and hopes you did, too! 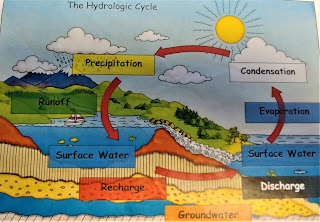 Posted by The Groundwater Foundation at 5:35 PM