By Brian Reetz
Here’s a quick question! What is coming up in March? Well on a personal note I know it’s both my grandma’s, my mom’s and my sister’s birthdays. There is March Madness and all of the hoopla that surrounds the NCAA basketball tournament, but there is also an important week.
It’s Groundwater Awareness Week – March 11-17, 2012.
I’ve been talking with each of the communities that are part of my program about gearing up for an activity that week.  I want them to do something to protect our groundwater, something that makes our groundwater sustainable for future generations.  I encourage you to do likewise.
So maybe you pick that week to put in a rain garden at your home or your work. Maybe you put a rain sensor on your irrigation system for your yard. Maybe you take that motor oil that is just sitting in your shed, with a chance to spill, down to a recycling center.
What is important is that you do something! All of us can do our part!
Mark your calendars and start planning what you will do during Groundwater Awareness Week.
Read more and get more ideas at: http://www.ngwa.org/Events-Education/awareness/Pages/default.aspx
Posted by The Groundwater Foundation at 2:36 PM No comments:

Ah, January.  The start of a new year.  A clean slate for all those changes we hope to make.

While these are all great things, my personal New Year’s resolutions are much simpler:
Last, but certainly not least:
I wouldn’t say my household is a “water waster” by any means, but I know there are things we can do better.  You may have read last week’s blog about our new five-minute shower timers.  I resolve to use this every day, and encourage my husband to do the same.  While we don’t generally water our lawn regularly in the spring and summer, I know we can be more efficient when it may be necessary; the same with watering the garden.  For example, watering in the morning or evening to minimize evaporation.  Another way I plan to save – collecting the water used for rinsing fruits and vegetable and using it to water my potted plants.  See more ways to conserve.

How about you?  Is water anywhere on your resolution list?
Posted by The Groundwater Foundation at 10:32 AM No comments:

Use Your Time Wisely 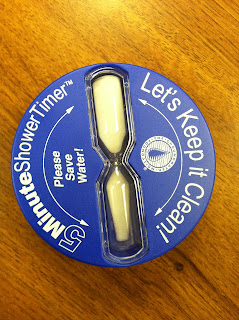 By Brian Reetz
The other day we received a shipment of 5-minute shower timers here at The Groundwater Foundation. From everything that I’ve read the average shower falls into the 5-7 minute range. The encouragement is to cut that time down to 3-5 minutes instead to help save water in the long run. Most of us don’t really need to take a shower longer than 5 minutes -- it’s just become part of our nature.
So with that in mind, I took a couple of them home and put them up in our showers. My daughter was the first one to use it while she was running her bath water. She announced afterwards that the tub was filled right when the hour-glass type timer ended – so 5 minutes.
My son was the next one to use it. I heard the shower kick on from downstairs and then heard it turn off. I knew that his shower was faster than normal, but if the timer made him change his speed then great! When I went upstairs to check the time, he had easily beaten it. He’s competitive like that!
My wife was the next one to be put to the test. She admittedly said that it ran out of time. She thought it was probably in the 6-7 minute range.
Finally it came down to me. Oh the pressure! I tried to follow my normal routine but I think I also noticed that I was going a little faster than normal. I easily beat the timer too. I’ve used it a number of times since then and have never came close to using up all of the sand.
How about you? A five-minute shower can use between 25-50 gallons so reducing the time you are in the shower by even a few seconds can make it more sustainable for everyone. Try timing your family’s showers and see if each person can shorten their time in the shower. Let us know how it works for you!
Posted by The Groundwater Foundation at 3:57 PM 2 comments: