Anniversary Story: "Providing Groundwater Education for All Ages Since 1996" by Steve Bennett

"The Best Decision"
by Jennifer Wemhoff, The Groundwater Foundation

While searching for an internship my junior year at Doane College, I came across an opening at The Groundwater Foundation in Lincoln. I knew nothing about the organization, but connected with Doane alum and Foundation staff member Jonna Jackson (now Jonna Hernandez), went in for an interview, and started soon after, in January 2000. Little did I know the decision to take this internship would affect the course of my life. 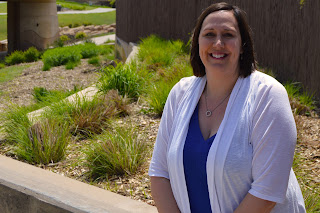 I interned at the Foundation the remainder of my junior year and all of my senior year. Jonna was returning to school to pursue a Master’s degree, so I stepped in to her position as Groundwater Guardian Assistant Director when I graduated from Doane in 2001.

Over the years at The Groundwater Foundation, I grew personally and professionally. I met my husband through an employee of The Groundwater Foundation at the time (Jonathan Mohr), who convinced me to go on a canoe trip down the Niobrara River in Nebraska (a beautiful, groundwater-fed river), where Mark and I met. I made lifelong friendships with people I met and worked with through the Foundation. My daughters were both born during Groundwater Awareness Weeks (in 2011 and 2014) and have been to many groundwater events. I’ve learned about the precious resource of groundwater and fostered a passion for protecting it, while educating others about what they can do. I love seeing the “aha moment” in people when they understand a groundwater concept or see how their actions can make a difference. I’ve traveled from coast to coast, gotten wet and muddy, spoken at large conferences and in small town halls.

The Foundation and I have seen each other through some tough times. Financial hardships, major life events, new homes. I wouldn’t trade the experiences I’ve had at The Groundwater Foundation for anything, because they have made me the person I am today, both at home and at work. That day in January 2000 when I accepted the internship was the best decision of my life.

Posted by The Groundwater Foundation at 10:00 AM No comments:

For several years in the 1990s, one of the highlights of the annual Children’s Groundwater Festival in Grand Island was the publication of the Groundwater Times. This four-page tabloid newspaper recounted the highlights of the day-long festival and included interviews with participants, sponsors, and guests, as well as photos of the many different events. I was privileged to serve as Groundwater Times editor for four years, 1995-1998, and remember the experience fondly. 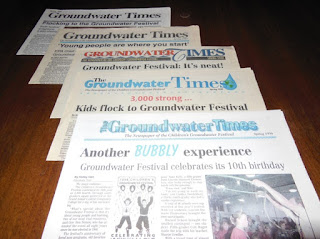 The Groundwater Times was distributed free to people involved in the festival including students, teachers, presenters, volunteers, and contributors. Among the sponsors over the years were the Union Pacific Foundation, the J.C. Seacrest Trust, the Grand Island Independent, the University of Nebraska-Lincoln (UNL) College of Journalism and Mass Communications, and the Hastings College Journalism Department. Assisting was photographer Ann Enevoldsen.

The newspaper articles were written by journalism students at various Nebraska institutions, including UNL, University of Nebraska-Kearney, and Hastings College. The students were supervised by their college instructors and a free-lance editor, who was hired by the Groundwater Foundation for the project. Assignments were developed with the festival director and given to the students in advance, along with background information.

“For one day we will function as a daily newspaper with assignments and deadlines,” the student writers were told. The editor added the following tips on what makes the Groundwater Times special:


The students wrote their stories on computers at the Grand Island Independent under the guidance of Pete Letheby. The Groundwater Foundation’s free-lance editor collaborated with Pete and other Independent editors to write headlines, edit copy, decide placement, and select photos for the publication.

The notable visitors who attended the festival provided exceptional interview opportunities for the Groundwater Times writers. Among the visitors over the years were two Nebraska governors, the U.S. Environmental Protection Agency administrator, the U.S. Geological Survey director, the U.S. Assistant Secretary of the Interior, a National Geographic reporter and photographer, representatives of UNICEF, and presenters from the United Nations in New York City and the Smithsonian Institution in Washington, D.C.

The Groundwater Times was a valuable learning experience for the college students, enabling them to work on their interviewing, writing, and editing skills in a real-world environment. It also provided youngsters attending the festival and festival presenters an opportunity to be interviewed, to talk to the media, and to organize and synthesize their thoughts. Even more, the Groundwater Times provided a reliable, interesting record of the festival and its impact on the community and the state.

Anniversary Story: "The Cycle of Life Continues" by Lori Davison

“The Cycle of Life Continues”
By Lori Davison, The Groundwater Foundation

Thirty years ago I was about to give birth to our first child, leave my job at the University of Nebraska Political Science Department, and become a stay at home Mom. Many changes in my life were just around the corner just like the many changes that have taken place at The Groundwater Foundation over the past 30 years!

After our son was born, Susan Seacrest contacted me about the possibility of doing some contract work at home for the newly founded Groundwater Foundation.  I accepted the offer and here we are 30 years later—my son and the Foundation are now 30 years young!

Just like the benchmarks in my son’s life, so has the Foundation achieved numerous benchmarks along the way.  Just like a baby getting its first tooth and the pain that goes with it, starting a nonprofit from the ground up comes with its own pain and challenges.

But that soon passes and next comes a baby’s first steps. One day they just take off, much like the Foundation began building momentum when it held its first Symposium in November of 1985, “Groundwater for the Future: Choice or Default.”

A few more years go by and the first day of kindergarten is here – you have to let your baby go and try new things! The Children’s Groundwater Festival was a huge step in “letting go” and trying something new to educate youth across Nebraska for the Foundation.  It was first held in Grand Island, Nebraska at Central Community College in April, 1989. Over 1,700 children rolled in by the busload and they enjoyed a full day of fun, interactive activities.

It seems like after kindergarten the years just fly by and all of a sudden your child is graduating from high school and going to college.  The Groundwater Foundation expanded their focus to educating adults through the Groundwater Guardian program, which provides recognition, support, and encouragement for communities of all types.  As an offshoot, the Foundation launched the Groundwater Guardian Green Site program which recognizes green spaces for their groundwater stewardship. The Foundation has been involved with many other partners organizing and implementing numerous educational programs which span across the country.