This week in Frannie’s exploration of the Awesome Aquifer Kit is all about why you should properly seal abandoned and unused wells.

Did you know that 42 million people in the United States use a private, or individual well to provide water for their families?  But as cities grow and develop, more and more people are turning to municipal systems to get clean, treated water directly to their faucets.  An unused well is basically a direct line for contaminants to enter the groundwater, so it is very important that, if a well is going to be decommissioned, then a well contractor should be called to seal it properly.

But what actually happens if a well is not sealed properly?

In rural areas, such as homes on or near farms, an open well can be contaminated with animal waste, fertilizers, and pesticides.  After a rain, runoff may simply pick up these dangerous chemicals and flow right over the open will, depositing them into the groundwater supply.   If a well is dug deep enough and is connected to other water supply sources in the area, it could contaminate large sections of the aquifers and prevent many other people in the area from being able to access clean water.

Forgotten wells are a big problem too.  Well casings may rust or break down and, even without the help of any outside contaminants, pollute the groundwater.

Wells that are dug, instead of drilled, are typically shallow enough not to majorly affect groundwater quality.  However, if these wells are not sealed properly, their wide shape may cause unsuspecting people and animals to fall into them and injure themselves.

BLOG: Take It Back to the Pharmacy 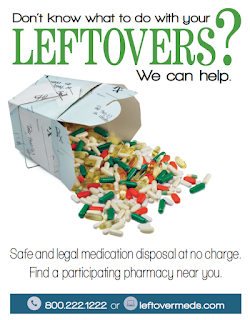 The Nebraska MEDS Coalition was formed in response to studies by the U.S. Geological Survey that found traces of pharmaceutical and personal care products in drinking water sources across the United States. In response to this emerging environmental crisis, the Coalition has worked to create one message in regards to drug disposal: “Take it to the pharmacy.”

From January 1, 2016 to April 31, 2017 nearly 27,600 pounds of unwanted and leftover medication has been collected across the state of Nebraska. Nebraska MEDS provides over 300 pharmacies with boxes for non-controlled substances and envelopes for controlled substances utilizing the Sharps Compliance TakeAway Environmental Return System. This program exists with no cost to the consumer or pharmacy; it is fully funded by grant appropriations from the Nebraska Environmental Trust.

The Coalition stresses the environmental importance of proper pharmaceutical disposal. Flushing medications down a toilet or drain can infiltrate the water, and trashing medication ends up in a landfill. The Statewide Drug Disposal initiative is the most environmentally-friendly way to destroy pharmaceuticals. After a box or envelope has been filled in a pharmacy, it is sent to a medical incinerator in Texas.

Pharmacies continue to join forces with the MEDS Coalition to make “Every day a take-back day in Nebraska.” Nebraska MEDS utilizes grant money from the Department of Health and Human Services (DHHS) to educate consumers and providers, visit pharmacies, and market the take-back initiative to pharmacies and consumers around the state. KETV television out of Omaha has created commercials, print and online ads, and radio segments as part of a marketing campaign. Additionally, Nebraska MEDS personnel continue to exhibit at various health professional conventions, seek partnership with those in political office, and raise awareness via social media.

The Nebraska MEDS Coalition is made of up of diverse agencies and organizations committed to proper medication disposal and environmental protection.

For more information about the Coalition or to find a participating Nebraska pharmacy, visit www.nebraskameds.org.

Hallie Schimenti is the MEDS Project Coordinator for the Nebraska Pharmacists Association. Reach her at hallie@npharm.org.
Posted by The Groundwater Foundation at 1:57 PM No comments:

Jim Goeke said he always knew he wanted to be a scientist, but when asked why he chose hydrogeology, his answer was "Thirst." Fall football practices and games throughout high school and college made him appreciate the countless bottles of water needed to sustain him.

Years later, Jim would become one of the foremost experts on Nebraska's groundwater. He was part of the founding of The Groundwater Foundation in 1985, and last week was elected to the Foundation's board of directors.

According to his biography from the University's School of Natural Resources, Jim's main research interests dealt with groundwater and groundwater management, particularly under conditions of scarcity. He worked to gather data to model unconfined aquifers in the central Platte region and stream-aquifer research in the Republican River Valley. He served as the University's liaison to the Nebraska Well Drillers Association, and worked with USGS on the High Plains Regional Aquifer System Analysis (RASA) and the High Plains National Water Quality Assessment (NAWQA).

Jim retired from the University in 2011 and became a professor emeritus.

This week in Frannie’s exploration of the Awesome Aquifer Kit is about sinkholes and how they are formed.

A sinkhole is a hole in the ground caused by the erosion of the soil or bedrock underneath.  They occur when acidic water seeps down and percolates through soluble, or easily dissolved, layers of soil like sandstone, chalk, or limestone.  Over hundreds or thousands of years, more of the rock dissolves while loose soil and sand shifts down to fill the cracks.  For a long time, the land is able to hold its own weight and even the weight of buildings constructed on top of it.  However, as even more of the rock dissolves and becomes empty space, the land becomes too heavy and will collapse suddenly.
To observe this in our aquifer kits, we’ll start by collecting our materials: a cup, sand, sugar, a paper tube, a pair of scissors, and a coffee filter or sponge.

Frannie starts by cutting a small hole, the same width as the tube, in the bottom of the cup and placing the coffee filter on top of it, keeping it in place with just a little bit of sand.

Next, she puts her tube over the coffee filter and fills the tube a part of the way with sugar.  The sugar represents the soluble rock that will dissolve when the ground gets wet.  While the tube is still in the cup, she pours in the sand so that it comes to about the same height as the sugar.  The sand represents the rest of the ground and will hold the soluble layer in place. 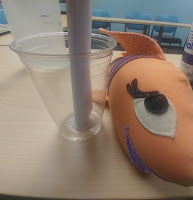 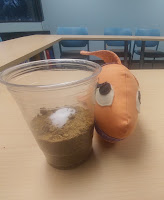 Slowly remove the tube without disturbing the sand or sugar too much and then pour more sand on top, just enough so that none of the sugar is showing.  Carefully pick up the cup and place the bottom into the water and in just a few moments, the water will infiltrate the sand and sugar, dissolving the sugar and creating our sinkhole.

Check out this cool graphic to see what's happening inside the cup!

Posted by The Groundwater Foundation at 4:21 PM No comments:

It's Water-Wise Wednesdays with Frannie the Fish! [Awesome Aquifer Kit: Erosion and Weathering}

This week in Frannie’s exploration of the Awesome Aquifer Kit is all about the concept of erosion and weathering.

Weathering is the slow destruction or wearing away of soil or rock which is followed by the process of erosion, where the broken particles are then carried away.  This is a very important concept for groundwater and it can happen in two ways: mechanical weathering or chemical weathering.

Mechanical weathering is when rock or soil is physically broken down by constant exposure to flowing or moving water.

Imagine a river that’s moving quickly, picking up sand from the beaches and carrying it downstream.  That’s an example of the beach being mechanically broken by the stream, which carries the sand downstream and makes those beaches smaller.  The same thing can happen underground where, as water slowly flows and picks up particles of soil or rock, the land might get worn down and even sink slightly.
If the sinking of the land occurs over a long period of time, we call that subsidence.

Chemical weathering is when the rock or soil mixes with the water and dissolves to become a new substance.

This usually happens when polluted rain seeps down into a carbonate type of bed rock.  The acidic water comes into contact with the basic soil and changes the chemistry of the rock so that it breaks down and forms new particles that move with the water flow.

It is this kind of weathering and erosion that is usually the cause of sinkholes, a type of sudden natural disaster that results with a large hole in the ground.  Frannie will show us more about sinkholes next week.
Posted by The Groundwater Foundation at 4:36 PM No comments:

BLOG: How Much Do You Know?

by Jane Griffin, The Groundwater Foundation

Next week (May 7-13) is Drinking Water Week. About half of us in the United States drink groundwater, but how much do you know about it? Take this short quiz to test your knowledge (answer key at the end of post):

2. An aquifer:
a. Is a geological formation that contains water
b. Can be confined
c. Is below the earth’s surface
d. All of the above

3. When an aquifer is replenished it is called:
a. Recharge
b. Discharge
c. Water table
d. Saturated zone

5. Groundwater is used for:
a. Drinking water
b. Irrigation
c. Industrial use
d. All of the above

There's a lot to learn about groundwater. Why not have some fun learning with our hands-on activities? Check out our Activities Library to find something that's right for you.

Do you want more quizzes about groundwater? Download our free Water1der mobile app and get your fill of groundwater trivia. See how much water you use in a day with our free water tracking app, 30by30, and find ways to use less water.

Get involved in local groundwater protection and education with a local Groundwater Guardian team. Is there one near you? Find out. If there's no team in your area, be a sparkplug and get one started - here's how.

Groundwater - it's the water many of us drink. Think about it during Drinking Water Week, and get yourself started on knowing more about this magical resource and involved in protecting it for future generations!