BACK TO SCHOOL TIME!

Once again children across the country are going back to school!  If you are a teacher, parent, scout leader, or other educator, The Groundwater Foundation has some great educational items for you!  Here are just a couple of items from our catalog—go to www.groundwater.org to check out more fun items!

Also, be sure and check out our new Water1der app!  Water1der is a free groundwater awareness trivia game app from The Groundwater Foundation.  Players are challenged in different areas of groundwater/water basics knowledge through various fun and educational playing formats. 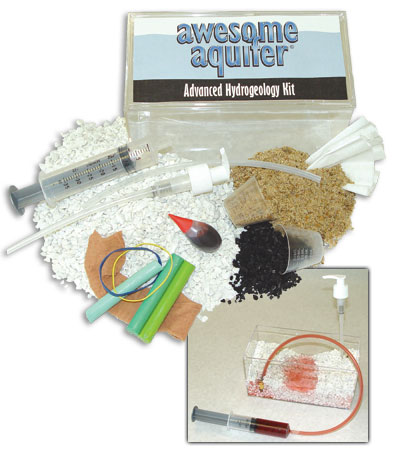 Posted by The Groundwater Foundation at 2:14 PM No comments:

Register today for the 2013 National Conference!

The 2013 Groundwater Foundation National Conference will provide presentations, case studies, networking opportunities, and discussions to help you get the tools and resources you, your community, and your business need to move towards groundwater sustainability.

The conference will also celebrate the efforts of groundwater stewards in the Groundwater Guardian and Green Site programs.

Join us, and register today!

Register by August 27 and get 20% off spa and golf servces (upon hotel check in) at Mission Inn Resort!


THE DETAILS
WHAT: 2013 Groundwater Foundation National Conference
WHEN: October 15-17, 2013
WHERE: Mission Inn Resort, Howey-in-the-Hills (Orlando area), Florida
MORE: The conference will discuss "Tools for Groundwater Sustainability: Working Together to Meet the Challenges." The agenda includes a variety of thought-provoking and useful information about moving towards groundwater sustainability, and includes optional workshops and tours.
QUESTIONS: Let us know! Contact Conference Chair Cindy Kreifels at 402-434-2740 ext. 103 or email ckreifels@groundwater.org.
We hope to see you in Florida!
Posted by The Groundwater Foundation at 4:20 PM No comments:

Groundwater Model Demonstration at the Beacon Sloop Club in Beacon, NY on the Shores of the Hudson River


When I do the groundwater model demonstration, I get questions about fracking and road salt; I get stories about the quality of water coming out of the tap, and I get Ah Hah moments of understanding. 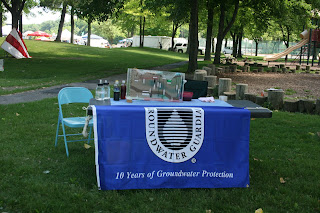 The two big regional issues in the Northeast are hydraulic fracturing (fracking) and high chlorides levels in the ground water.  Most of my visitors were aware of the fracking debate, but more often than not, they asked how my model shows how the fracking affects water supply wells. I would say at the scale of the model the fracking would take place 1,000 feet below the model, but the problems often take place in the shallow aquifers that we see in the model.


High chloride levels in the groundwater are not on most people’s radar screens.  Every once in a while, a savvy soul will bring up high levels of chlorides found in wetlands and well water.  The high levels are caused by the ubiquitous use of road salt during the winter.  And, unfortunately, sodium and chloride ions do not breakdown any further in the groundwater.  I fear the road salt impacts will be with us long after the fracking debate has faded away. 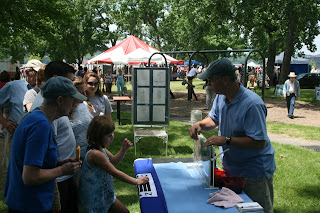 Sometimes groundwater is very personal.  One visitor mentioned he noticed groundwater seeping out of the rocks on the path up the day after Tropical Storm Andrea passed through; a spring!


Another visitor was very proud of his work to reduce the sulfur smell in his water.  Sulfur water is very common around here.  He installed a pressure tank without a bladder, and he is able to vent the sulfur gas several times per week.


The Fishkill Creek is near the City of .  Part of the aquifer under the creek has been contaminated by industrial pollution.  The pollution is so bad that industry teamed with to construct a pipeline from south to the Fishkill area to bring clean water.


A visitor to my demonstration said she lives near the Fishkill Creek aquifer.  She is worried, because she often gets an oily sheen on her coffee in the morning.  I could only offer the name of a good lab where she can have the water tested. 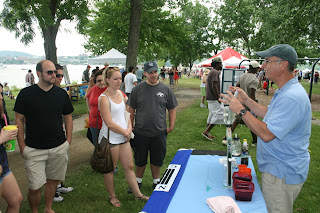 Some of the visitors were concerned about pollution from buried oil tanks.  We shared stories about removing tanks, and what happened when the tanks had leaks in them.


The Ah Hah moments were plentiful – groundwater moves, albeit slowly; pollution moves with the groundwater; wells drawdown and recover; gravel is more permeable than sand; and it is much cheaper to prevent water pollution than the clean up water pollution. 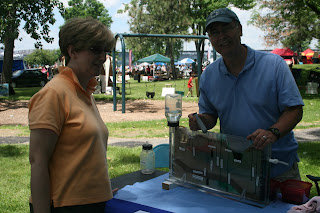 The Beacon Sloop club is a wonderful host.  They gave me a nice shady location with lots of passersby.  And, the best part is the free strawberry shortcake for us exhibitors.

We’ve probably all heard it before, but something so important deserves repeating…WATER IS GOOD FOR YOU!

Did you know that by drinking water you can burn fat, beat a fever, improve your complexion, build muscle, fight a stomachache, and even improve your mood?  Dr. Fereydoon Batmanghelidj wrote in, Your Body’s Many Cries for Water, that the body can “misinterpret thirst signals as pain” and by drinking more water we can cure our headaches, depression, asthma and even arthritis.


It’s important for our good health to get enough water each and every day.  Most of us do this when thirsty and by drinking with our meals.  We also get fluids through the foods we eat.  This water performs very important functions such as:  regulating our temperature, lubricating joints, protecting our spinal cord and sensitive tissues, and helping rid the body of waste through urination, perspiration and bowel movements.  Our body requires even more water when we are in hot climates, physically active, feverish, or ill from diarrhea or vomiting.


Here are some tips for you to help with getting enough water in your daily routine:


·         Select water when eating out (this helps save money and calories J).  In fact, drink a glass before dinner to curb your hunger and sip on water throughout the meal to compensate for higher sodium levels present in your meal.


·         Hydrate between meals too.  When we feel hungry, our bodies may be really just trying to tell us we need water rather than calories.

Posted by The Groundwater Foundation at 1:37 PM No comments:

by Jennifer Wemhoff, Program Manager
The U.S. Drought Monitor is produced weekly, and is developed through a combination of multiple indicators and impacts from a variety of federal and academic partners. It is a valuable tool for water managers everywhere, and can be fascinating to the rest of us.
The Drought Monitor enables us to "see" drought as it develops, expands, retreats, and moves. This video shows the weekly map from January 2010 through December 2012. It's fascinating to see the persistence of drought in many parts of the U.S. and is a visual representation of how widespread the impacts of drought can be felt.

If you want to see more animations of drought by year, check out http://droughtmonitor.unl.edu/animations.html and see the U.S. drought maps all the way back to 1999.
Watching drought unfold is a reminder that we all have a responsbility to conserve water and use it responsibly, in everything we do.
Is your area dealing with drought? What's the worst drought you have experienced?
Posted by The Groundwater Foundation at 2:13 PM No comments: