It's Water-Wise Wednesdays with Frannie the Fish! {Water Inside Us}

Did you know that humans are made up of 60-70% water? Water helps blood flow easily, food digest in your body, and allows toxins to be filtered through your liver and kidneys before flushing them out as waste. People like you need to drink water and eat things with lots of water in them (like watermelon and strawberries and cucumbers and celery!) to keep our bodies happy and healthy.

Humans aren't the only living things made up of water - so are fish like Frannie! Fish, on average, have are made up of 78-85% water, just a little higher than humans.  Frannie has a fun activity you can do to illustrate just how much of your body contains water particles.

All you need is a few simple things: 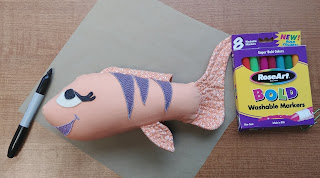 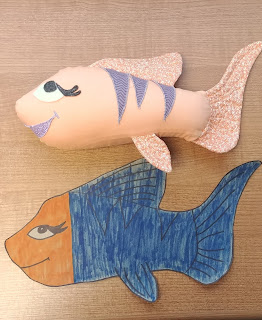 Look at how much of you contains water! It's in your bones, your blood, your skin, your belly, and even your eyes! Seeing how much of our bodies are made up of water helps us understand why always having a clean drinking water source is so important.

Posted by The Groundwater Foundation at 3:21 PM No comments:

BLOG: Lee Orton to Be Honored with Groundwater Industry Award

The award will be presented to Mr. Orton at Groundwater Week in Las Vegas on December 5, 2019.

After graduating law school, Orton began his career in the natural resources and groundwater industry by developing the State Water Plan of Nebraska in 1969. Shortly after, he became the first Executive Director of the Nebraska Association of Resources Districts (NARD) where he successfully managed the merging of 153 local government groups into 24 natural resource districts.

After a decade with NARD, Orton began his private law practice where he played a pivotal role in Nebraska's well drilling industry. Working with the Nebraska Well Drillers Association, Orton would draft and help pass a new law through the Nebraska Legislature which created a well professional’s license and  a state level governing board to oversee the licensing process.

Orton would go on to become the first Executive Director of the Nebraska Well Drillers Association where he would be hired by the state government to draft new rules and regulations of well drilling licensure.

"Lee has dedicated himself to protecting and conserving groundwater throughout his distinguished career," said Jane Griffin of the Groundwater Foundation, who worked closely with Lee for several years when he served as a member of the Foundation's board of directors. "What has moved him above and beyond is his passion for his work on behalf of groundwater."

Orton has long proved to be an invaluable resource and advocate for the groundwater industry. He was instrumental in the formation of NGWA’s Government Affairs Committee as well as organizing the first Washington, D.C. Fly-In which allowed NGWA members to directly lobby their lawmakers.
Orton remains one of NGWA’s strongest advocates in state and federal government affairs.

"Lee has the aptitude and demeanor to bring those from all water disciplines – surface and groundwater, contractors, scientist, engineers, consultants, etc. together with regulators and politicians to navigate the legislative processes at the state and federal level for the wise and beneficial use of the resource. He has (still is) dedicated his entire career to the beneficial management of our most precious natural resource, water!' stated nominator Thomas Downey, CWD/PI, President of Downey Drilling Inc. in Nebraska and Past President of NGWA.

BLOG: Groundwater and Your Body

Groundwater is literally part of you.

It's the water many of us drink, and when it's in our bodies, it helps support processes that keep us healthy and thriving.

We all need to drink water every single day to survive. Adults need somewhere around 2-3 liters of water each day (some of this comes from food). Why? Because it does a number of amazing things in our bodies.

Water is "sticky," which comes from its surface tension, and this plays a part in our bodies being able to move materials from our toes to our head and everywhere in between.

This is just one more way groundwater is magical - it helps keep us healthy and thriving! How will you help protect this amazing resource?

Adapted from "The Water in You" at https://water.usgs.gov/edu/propertyyou.html
Posted by The Groundwater Foundation at 12:17 PM No comments:

It's finally October! Do you know what that means? Halloween is right around the corner!

You can make this Halloween fun and sustainable by upcycling a paper towel roll or toilet paper roll into one of Frannie's favorite spooky decorations: flying bats! Hang them in any room in your house and even outside, as long as they don't get wet!

Before you get started, you'll need to gather some supplies: toilet paper or paper towel rolls; black paint; white paint, googly eyes, or other eye-shaped stickers, the creepier the better; brushes; black paper; scissors; and glue. If you would like to make your bats look like they are flying at you, you will also need string and a hole punch.

If you're using a paper towel roll, you will need to cut it into three smaller pieces that are about the size of a toilet paper roll.

1. If you want to hang your bats from your door handle or tree limbs, start by punching 2 holes on either side of the roll and thread your string through.

2. Fold the ends of the empty toilet paper roll in together. You may need to secure the folds with glue.

3. Paint the roll black. While it's drying, cut out bat wings from the paper. You can cut the wings individually or as one whole piece. Either way, make sure to leave some space between the wings or a tab at the end of a wing so you can glue them to the back of the roll.

4. Once the glue is dry, bend the wings back just enough so that they stick out from bat.

5. Now it's time for the eyes. You can either glue on googly eyes, place the eye stickers. If you're painting the eyes, start by painting on small white ovals. When the white paint dries, dab a small circle of black paint for the pupils.

6. Display your bat where everyone can see!

Have a very Happy Halloween everyone! 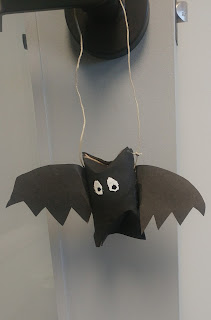