Groundwater can be a tricky subject to teach. After all, you can't go outside and look at groundwater the way you can a lake or river. It's hard to visualize something so abstract, let alone understand and appreciate it.

That challenge has driven the Groundwater Foundation for 35 years to find innovative, hands-on, brains-on ways to teach kids - and adults - about groundwater. 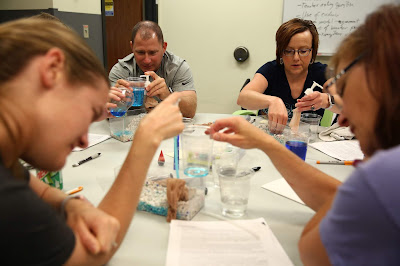 Over the past couple years, the Groundwater Foundation has implemented a wide-ranging project, Recharging Groundwater Education: Tools for Engagement and Action. Through the project's pilot in Nebraska, over 300 educators learned how to use various teaching tools in their classroom, including:


Both the Awesome Aquifer Kit and Hydrogeology Challenge enable students to investigate groundwater, a vital natural resource that plays a critical role in sustaining life but cannot be experienced directly. The tools also allow educators to point out issues specific to their local community (i.e. lithology from local well logs, existing contamination threats, etc.), which is an important feature to making the lessons pertinent to students' lives.

These tools have been used with great success in elementary, middle, and high schools across the state, and thanks to online training and resources, throughout the country and world. Educators told us: "I now feel prepared and motivated to teach about groundwater and its role in life and our role in protecting it to my students."

Some educators first utilized the groundwater education activities in the classroom, but then moved beyond into local action. "In-classroom learning went great, and it became a three-week unit including an onsite field trip based on the reported hydrogeology of the area. The students were engaged the majority of the time and were challenged to determine outcomes from the classroom learning." 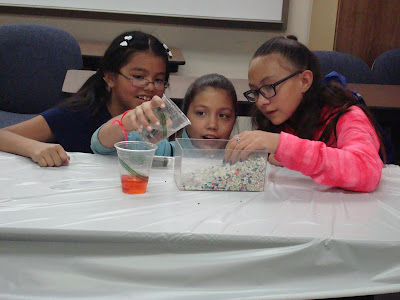 The Awesome Aquifer Kit is a hands-on model-building kit that promotes cooperative learning through inquiry. Because groundwater is hidden in aquifers below the earth’s surface, the unique format of the Kit allows students to “see” groundwater and how it moves. As students build their aquifer model, they increase their environmental literacy and understanding of groundwater’s role in their lives. The versatility of the Awesome Aquifer Kit enables educators to challenge students of different grade levels with varying levels of complexity.

A high school teacher who used the Kit in the classroom told us: "The activities are fun and easy to follow. They explained groundwater and how to translate it to the classroom." 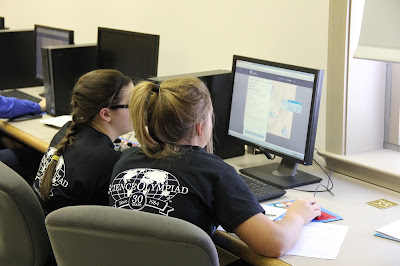 The Hydrogeology Challenge is a data-driven computer-based groundwater simulation tool that challenges students to investigate groundwater flow, contemplate the difference between modeling and reality, and apply the calculations to identify solutions to real-life threats to groundwater. The Hydrogeology Challenge is a highly regarded teaching tool by educational and water industry professionals and can be adapted to many grade levels. An assistant professor in Geology and Geological Engineering at the South Dakota School of Mines and Technology stated: “It is a great tool for introducing groundwater modeling.” And a student who used Hydrogeology said: “Hydrogeology is my favorite part of science and using it in conjunction with computer modeling is an interesting new way to study it.”

Groundwater education is necessary to foster the next generation of groundwater industry professionals, managers, and stewards. Get started in your classroom or community: www.groundwater.org/kids or get in touch at info@groundwater.org.
Posted by The Groundwater Foundation at 4:29 PM No comments:

Each video focuses on a different resource within the educator toolkit. The first video in the series outlines what groundwater is, why groundwater education in our classroom is so important, and sets up how the training videos will help educators bring groundwater models into their classroom.

The following three videos in the series focus on the Hydrogeology Challenge, an online groundwater model that presents users with a map of an area with wells and some well logs. Users walk through the same calculations that professional hydrogeologists use to calculate groundwater flow direction, slope, and speed. In the classroom, teachers can challenge their students even further with an Applied Knowledge Scenario, which asks the students to use the calculations to evaluate a potential threat to groundwater. The Hydrogeology Challenge and Applied Knowledge Scenarios is best used with upper level students to show them how algebra and geometry can be used with science to solve real-world problems.


The rest of the videos in the series shine a light on the many different activities that can be done with the Awesome Aquifer Kit. Faithful readers of Frannie's blog may remember the blog series she did a while ago, demonstrating everything from the connection between groundwater and surface water to how permeability affects groundwater's ability to flow within different soils. The videos provide top tips on how use the kits, maintain them, and make them a regular part of a teacher's water science unit.

Roric Paulman, a pioneering Nebraska ag producer whose conservation and stewardship practices have been recognized throughout the state, has been selected to receive the 2019 Maurice Kremer Groundwater Achievement Award from the Groundwater Foundation. Paulman will be presented with the award by 2011 Kremer Award Winner Lee Orton at the Maurice Kremer Memorial Lecture on March 4, 2020 at 3:30 p.m. in the Hardin Hall Auditorium (room 107) on the University of Nebraska-Lincoln East Campus (33rd and Holdrege Streets, Lincoln). Light refreshments will be served at 3:00 p.m.

The Kremer Award is presented annually by the Groundwater Foundation to an outstanding Nebraskan who has made a substantive contribution to the conservation and protection of Nebraska’s groundwater. The Groundwater Foundation is a nonprofit organization based in Lincoln, Nebraska that connects people, businesses, and communities through local education and action, making us all part of the solution for clean, sustainable groundwater.

“Roric’s dedication to protecting and conserving groundwater was made apparent to me within the first two minutes of meeting him speak,” said the Groundwater Foundation’s Jane Griffin. “More importantly, he doesn’t just talk about water conservation he does it, and he motivates others to do better, too. On behalf of all of us at the Groundwater Foundation, it’s an honor to recognize Roric with the Kremer Award.”

“Roric has a rich family history of concern about groundwater,” said Jim Goeke, University of Nebraska-Lincoln Professor Emeritus and 2001 Kremer honoree. Goeke explains that Paulman followed in the footsteps of his grandfather, serving on the Twin Platte Natural Resources District (NRD) Board from 1997-2000 and helping guide the district’s groundwater policies. “Roric irrigates 8,000 acres across three NRDs using cutting-edge technology and equipment. Raising a number of crops, Roric strives to use groundwater as most efficiently as possible to guarantee profits and a sustainable supply of groundwater,” Goeke said.

Paulman was one of the founders of Nebraska Water Balance Alliance, which works to promote the most efficient use of groundwater in Nebraska, and currently serves as its President. He also serves on the West Central Water Coalition, the University of Nebraska West Central Research and Extension Advisory Board, Ag Builders of Nebraska Board, UNL Presidents Advisory Council, Daugherty Water for Food International Advisory Board, is a member of a numerous agriculture associations, and a past member on local, state, and national boards and councils.

He and his wife, Deb, have four children and six grandchildren.

The Kremer Award is chosen each year by a selection committee appointed by the Groundwater Foundation’s Board of Directors. It is named for Senator Maurice Kremer, who spent 20 years in the Nebraska Legislature where he was best known for his contributions toward protecting the state’s water resources, earning him the nickname “Mr. Water.”

“Roric Paulman is a leader in use of the latest technology to optimize the crop yield/water use balance,” selection committee member Don Kraus said. “He also remains a strong advocate for producers across Nebraska.”

Leaders from across Nebraska looked at new ways to approach an old challenge at a Jan. 21 nitrate strategy meeting facilitated by Crystal Powers of Daugherty Water for Food Global Institute, the Nebraska Water Center (NWC) and Nebraska Extension, and Katie Pekarek of the University of Nebraska–Lincoln (UNL) School of Natural Resources and Nebraska Extension.

Participants, including the Groundwater Foundation's Jane Griffin, worked to develop short-term priorities to improve nitrate-water quality issues. These include:

Participants identified nine working groups to achieve the above objectives and committed to the 5-year goal of improving nitrate water quality issues in Nebraska. Participants broadly committed staff time, money, and other resources to working groups which will be convened in the coming months.

For more information, visit https://waterforfood.nebraska.edu/.
Posted by The Groundwater Foundation at 2:55 PM No comments:

The kits are assembled at Community Alternatives in Lincoln, NE. Community Alternatives is a vocational site that provides work experience and support for individuals with developmental disabilities. The people who work on the Awesome Aquifer Kits learn work and life skills, earn  money, and see themselves as part of the larger picture of groundwater education.

The Groundwater Foundation is proud to partner with a local organization that does such great work  in the community.  From the people who make the kits to the students who use them, the Awesome Aquifer Kits offer opportunities to include everyone in the protection of our drinking water source.

Posted by The Groundwater Foundation at 4:11 PM No comments: