All I Want for Christmas is Precipitation!

When the sun is scorching and lawns are more brown then they are green, drought is a common topic of conversation. The seasons have change and one would think the topic of drought would taper off along with the scorching heat. However drought is still very much on our minds.

Looking at the state of the climate, drought is very apparent!

Will we have a wet Christmas? Experts say, no relief insight!

When it comes to drought, conservation of our water resources is even more important. What conservation measures have you taken that go beyond the more traditional measures such as lawn water restrictions or turning off the water when you brush your teeth?

Need some other water conservation ideas? Read this.

Strategic Planning: What Lies Ahead?


Strategic planning – one of those things it’s always hard to find time for – we know it is important and yet it always seems easier to put it off than to move forward on it.  As we prepare to meet with The Groundwater Foundation Board of Directors this week to take on this exact task or at least the beginning of it, one steps back and really thinks about what it is we do and why.  That has been an interesting thought process – one that has me thinking about:


·         What headline would we most/least like to see about The Groundwater Foundation?


·         What is the biggest gap between what The Groundwater Foundation claims to be and what it actually is?


Share your thoughts with us as we move through this process of strategic planning as the more information we have the better the process will be.
Posted by The Groundwater Foundation at 5:15 PM No comments:


Since it is Election Day, I thought I would give everyone an update on a survey that was recently conducted in Gothenburg. Nope, it’s not about the Presidential Election or about the Senate race, but about groundwater.


The Environmental Science Class at Gothenburg High School, taught by Maggie Tiller, conducted the survey at their school in late October. After students filled out the forms, they were rewarded with Let’s Keep It Clean pencils and bookmarks to remind them about ways to protect and conserve groundwater. Additional students also receive bigger rewards in the forms of a rain gauge or shower timer.


You can take the survey yourself by going here: http://survey.constantcontact.com/survey/a07e32gujk5gf8lxrxe/a02195h9782nq9/questions


Now that you’ve taken the survey, here are some of the results from the nearly 100 students that took the survey in Gothenburg.


·         83 percent of the students said that clean drinking water was important to them.


·         79 percent of students said that clean groundwater was important to them.


·         52 percent of the students didn’t know where they get their drinking water from (private well, community well) each day.


·         45 percent of the students said they were not informed about groundwater issues in their area.


We will be working with the class throughout the year to help inform the student body about groundwater. It should be a fun, educational year at the home of the Swedes. 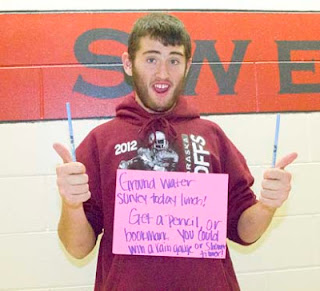 Posted by The Groundwater Foundation at 1:19 PM No comments: