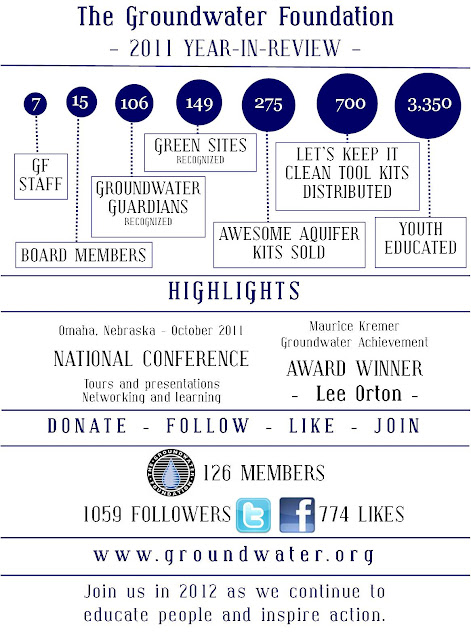 Posted by The Groundwater Foundation at 9:07 AM No comments:

That is always the question during the Christmas season—do we get a real tree or get the artificial one back out of storage?  Growing up our family always had an artificial tree--reason being you buy it once, it lasts for many seasons, and you don’t have to keep it watered.  Seems reasonable right?  After researching this subject, next year the family may be going on a tree hunt through the country sides!


Artificial trees are made from a kind of plastic called polyvinyl chloride, which is derived from petroleum and can contain lead or other harmful toxins.  Also, about 80% of fake trees are manufactured in China, where most electricity is generated by burning coal—one of the dirtiest fuel sources.   After the trees are made, they must also be shipped across the ocean, usually in diesel-fuel powered ships, resulting in even more greenhouse gas emissions that contribute to global warming.  The average family keeps a fake tree for about five to six years, and then it goes to the landfill, where it just sits because it doesn’t biodegrade.  In contrast, real trees are completely recyclable, and they are grown in the United States on thousands of farms that employ an estimated 100,000 people.
Here’s another interesting fact—for every real Christmas tree that is sold, about nine more are left to mature and grow to the desired heights on the farms.  There are about 12,000 tree farms in the U.S. that are growing about 400 million trees right now.  So there are actually more Christmas trees than there are people living in the U.S.!  As the trees are maturing, they will recycle the air, purify groundwater, stabilize the soil and provide homes for birds, mammals, and insects.   After the Christmas season is done, the trees can be recycled and used as mulch.  Other uses for the recycles trees include being used as fish habitats, heron nesting grounds, used to prevent beach erosion, and to preserve freshwater marshes.
Real or fake—next year as the time approaches to get the artificial tree out again—maybe a trip to a tree farm may be in order!
Happy Holidays!
Posted by The Groundwater Foundation at 10:35 AM 1 comment:

Out of the Mouths of Children

The other day I was watching my three-year-old granddaughter, Brynn, as my daughter had some errands to run and it is always much easier to so without a wee one in tow.  We had eaten a small, but messy snack and as I ran the water wanting it to warm some in order to wash her sticky hands, Brynn looks up at me and says “Grandma, don’t run the water too long, you’re wasting it.”  I responded to this comment in two ways.  First I was absolutely beaming with pride that my very young grandchild could understand that we need to conserve and be mindful about water use.  And, secondly, that I, someone that knows better than to run water to warm it up yet wanted to make sure it was comfortable for her grandchild, was irresponsibly running the water in a very wasteful way.  What an “aha” moment!

Sparks make the world go round! 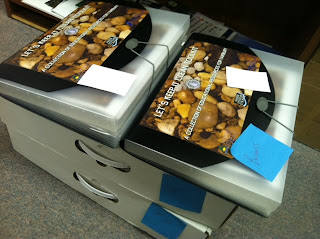 As I work with different communities across the state of Nebraska, each of them has their own way of getting projects accomplished. Some of them are lead by a strong central government, while others are more grassroots with citizens across the community taking up the good fight!
But all of them have sparks! You know that segment of the community that gets projects going and done with tremendous results. You just never know where you might find them. Sure they can be part of the governmental structure but many times they are behind the scenes in a community and just want to do their part to help a project succeed.
On Tuesday I was in Fairbury doing work for my Let’s Keep It Clean program and I was fortunate enough to have meetings with a couple of sparks. I won’t name them but be assured that they are doing the right things in Fairbury and moving the town in a direction that will be great. They give me energy too. After distributing toolkits throughout the community to make my program even more sustainable I left with a great feeling about the home of the Jeffs.
So what about you? Are you a spark? Let us know what you did today to help protect water resources within your community, state or the world!

-- Brian Reetz
Posted by The Groundwater Foundation at 11:06 AM 2 comments: