After months of preparation and hard work, the Water1der App is ready for launch! Read all about it in our release to the media and download it today!


LINCOLN, NEBRASKA – The Groundwater Foundation is launching “Water1der”, a mobile groundwater awareness trivia game app, developed by SectorNow’s CleanEarthApps division, which is available free of charge from the Apple app store. The game is designed to educate everyone about our most precious resource – water.


Through a fun, educational format, the game challenges players in their knowledge of groundwater basics, pollution prevention, conservation, irrigation, the water cycle, aquifers, recycling, watersheds, water use and wells. Players “spin” a wheel to choose a category and play their way through a variety of questions and activities and then see their final score.


To learn even more about the app, visit www.water1der.com. An official launch party will take place starting at 3:30 p.m. on Friday, March 1 at the Michael Forsberg Gallery, located at 100 North 8th Street, Suite 150 in Lincoln, Nebraska.


“With our society turning so mobile, we thought this was a great opportunity to get groundwater awareness into the hands of everyone,” said Groundwater Foundation President Jane Griffin. “Even though it is in a game format, it’s a great educational tool for everyone and fits with the Foundation’s mission to educate and inspire to ensure clean, sustainable groundwater for future generations.”


“A core component of our strategic plan is to partner with organizations who lead the movement to improve environmental quality,” said SectorNow CEO Evelyn Bartlett. “The Groundwater Foundation’s passion, knowledge and legacy in protecting water made them an attractive partner. Water1der will be an important tool teachers and advocates can use to teach the importance of water stewardship.”


Every segment of the community can benefit by downloading and playing Water1der:


·         Kids will find it fun, interactive and easy to use and they will gain a knowledge of water

The Water1der app is part of the Growing Groundwater Awareness in Nebraska program, funded through a grant from the Nebraska Environmental Trust. The Trust is funded by proceeds from the Nebraska Lottery and has awarded more than $178 million to more than 1,300 conservation projects across the state of Nebraska since 1994.

Rain Bird, the Nebraska Department of Environmental Quality and the Water Research Foundation also provided support for the app. For more information about The Groundwater Foundation, call 1-800-858-4844 or email info@groundwater.org or visit them on the web at www.groundwater.org.


The Groundwater Foundation is a non-profit organization based in with a mission to educate people and inspire action to ensure sustainable, clean groundwater for future generations. Since its inception in 1985, the Foundation has offered various educational programming for youth and adults. To learn more, visit www.groundwater.org.


Posted by The Groundwater Foundation at 1:47 PM No comments:

GROUNDWATER NIGHT AT THE TOWN OF MONROE, NEW YORK

Ed Helbig and I have teamed up to take our respective road shows on the road together.

Ed is the Education Coordinator for the Orange  County Water Authority, and I am a long time groundwater advocate.  We decided to team up and present information about groundwater resources to groups in the County.  Many of the groups are or have been Groundwater Guardian Communitites, and this is an opportuntity for them to sponsor a Results Oriented Activity and come back into the fold.

We were invited to do our inaugural Groundwater Night by our old friend, Sandy Leonard, the Supervisor of the Town of Monroe.  She suggested that we work with the Town of Monroe Conservation Advisory Commission and another old friend, John Ebert, the Chairman of the Commission.  Thanks to both of them for their support and efforts to make the evening a success.


Ed started off with a presentation at the macro level -- 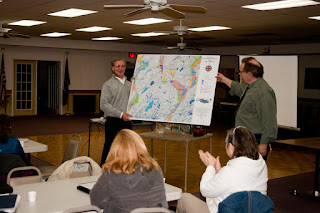 My presentation used the groundwater model to give the micro level -- 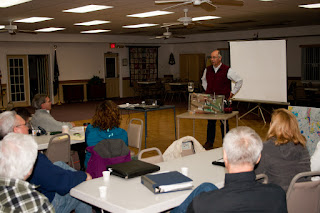 The discussions quickly turned to road salt.  The members of the commission are well versed in environmental issues in the County, and chlorides in drinking water are becoming a serious problem.

They are concerned by the municipal "black road" policies in the winter -- clear the roads of snow and ice as quickly as possible.  One member suggested that the municipalities approach the salting of roads in a manner similar to Integrated Pest Management instead of a brute force approach.

John Karl, DPW Superintendent and long time Groundwater Guardian joined us and noted that he is having problems getting local malls to reduce salt applications to protect nearby wells.  Three of Harriman's wells are in the shallow sand and gravel aquifer.

John did relate an interesting story.  When Hurricane Irene hit in 2011, the flood plain in Harriman had water six feet deep.  The flood plain is over the sand and gravel aquifer.  After the flooding had subsided, they measured the chlorides and found a significant drop in the amount.  The hurricane had flushed the chlorides from the aquifer.

At the end of the evening Ed presented a map of the water resoures of the Town of Monroe to John Ebert and the Commission.

We were encouraged by the wonderful exchange of information and the interest in protecting groundwater.
Posted by The Groundwater Foundation at 9:50 AM 1 comment:

by Jennifer Wemhoff, The Groundwater Foundation
It's been a rough cold and flu season thus far.  The 2012-13 season began relatively early, and according to the CDC, by January 2013 flu activity was high across most of the U.S.
Over-the-counter medications are available to help ease some of the symptoms of colds and flu, but often those wanting a drug-free solution to sinus congestion reach for a neti pot.  A neti pot, described by WebMD, looks like "a cross between a small teapot and Aladdin's magic lamp."  It is used to irrigate nasal passages to help ease sinus congestion and pressure. I have used one to deal with colds in the past, and it made a world of difference.
Like many others, I used water right out of the tap in my neti pot.  After reading an article in the October issue of WC&P Magazine and information on the CDC website, that's not a recommended practice.  While extremely rare, there is a risk of infection from Naegleria fowleri, a dangerous waterborne ameba commonly found in warm freshwater, in neti pot use with tap water.  According to the WC&P article, conventional water treatment is effective against the ameba, but "treated tap water and associated storage containers are not sterile.  Under the right conditions, ameba and bacteria begin to regrow and can quickly reach high levels of contamination."  Naegleria fowleri is not harmful when ingested, but can be fatal when forced into nasal passages where it has easy access to brain tissue.
To reiterate, the risk of infection from Naegleria fowleri in a neti pot using tap water is very, very rare, so if you've used a neti pot with tap water, don't panic!  The threat, however, does help highlight best practices in using a neti pot this cold and flu season.  The CDC recommends using water that has been:
The neti pot itself should be rinsed with the water described above and left open to air dry completely.
I for one will start using distilled water in my neti pot, and hope for a swift end to this cold and flu season, for all of our sakes!
Posted by The Groundwater Foundation at 11:26 AM No comments:

Where Does Your Water Shed?

By Brian Reetz, The Groundwater Foundation


The theme was “Where Does Your Water Shed?” Students like Makenzie needed to draw a picture relating to that theme and they had a week to do it! Earlier this week the winner was announced and drum roll please….she won!


Makenzie is in the fourth grade at Stockton Elementary School in Stockton, Kansas. The contest was open to all of the other elementary schools in the county too.


Is there a contest in your community that you can enter? If there is, be sure to enter it and let everyone know how important water is to you!


Here is her winning art work: 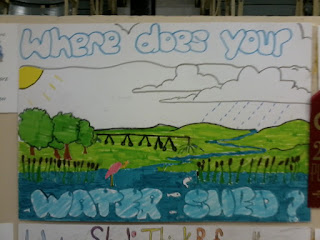 Posted by The Groundwater Foundation at 2:02 PM No comments:


Tools for Sustainability: tools for you, your business and your community to move towards groundwater sustainability.
When:  October 15-17, 2013

Where:  Mission Inn Resort, Howey-in-the-Hills (Orlando), Florida
Mark your calendar now – check out our website for information about the conference: www.groundwater.org


Check out the location: www.missioninnresort.com
See you there!
Posted by The Groundwater Foundation at 9:30 AM No comments: