Citizen involvement is key to groundwater protection.  The Advisory Committee for Groundwater Management meets regularly to oversee the program and ensure it is achieving its purpose.  Our program has evolved to meet changing needs because committed groundwater users took the time to share their perspectives.   All well owners pay to participate in the program and have benefitted from it.

From 1997-2012, more than 350 unused wells have been plugged and abandoned , 494 homes and businesses have received financial assistance to connect to a municipal water system, 1.7 million square-feet of turf has been removed by well owners, and more than 17,000 acre-feet of treated Colorado River has been permanently recharged in the Las Vegas Valley to help stabilize the water level. 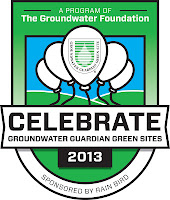 The Groundwater Foundation, along with program sponsor Rain Bird, is excited to announce and launch a campaign to celebrate Groundwater Guardian Green Sites.
The respected Green Site title is awarded to green spaces that implement responsible groundwater-friendly practices as part of their routine site maintenance. Practices such as using native plants in landscaping, tracking water used as part of irrigation, maintaining a setback distance around wells and surface water, and properly managing potential sources of contamination are documented as part of a confidential application process that awards designation as a Green Site.
In celebration of their 80th anniversary and the invention of the impact sprinkler, Rain Bird has joined The Groundwater Foundation in celebrating Green Sites in 2013. As part of this celebration and their sponsorship in 2013, Rain Bird Corporation is giving away $2,000 in product to one of the first 80 new or renewing sites in 2013 to continue groundwater protection efforts at their site. The winner will be announced at The Groundwater Foundation’s 2013 National Conference, to be held October 15-17, 2013 at the Mission Inn Resort in Howey-in-the-Hills, Florida.
The Green Site program encourages good stewards of groundwater by encouraging green sites to use responsible management practices. The public recognition of Green Site designation is a one-of-a-kind display to your community about your green space’s commitment to protecting a precious resource - groundwater.
Later this summer, in recognition of the 80th anniversary of the impact sprinkler, The Groundwater Foundation and Rain Bird will  be joining our efforts as part of 80 Days of Impact, leading up to the Foundation’s 2013 National Conference. We’ll be spreading the word about the work Green Sites are doing and how they’re making a difference, and working to add new sites to their ranks.
Visit our website to learn more about the benefits of becoming a Green Site, including a chance to win $2,000 of Rain Bird product.
Posted by The Groundwater Foundation at 2:28 PM No comments:

By Steven G. Seglin, Board Member of the Ground Water Foundation

Wide publicity has been given to the lawsuit filed in the United States Supreme Court by State of Kansas against the State of Nebraska, claiming that Nebraska has used more Republican River water than its allotted share under the Republican River Compact. Kansas claims that this overuse is the result of excessive pumping of ground water by irrigators throughout the Republican Basin.

Little publicity however, has been given to the efforts of natural resources districts and irrigators in the Republican River Basin to conserve the very ground water that Kansas claims to be overused. These conservation efforts by NRDs and irrigators emanate from a combination of regulatory policies initiated by the Republican River Basin natural resources districts and best practices initiated by irrigators.

A summary of the efforts made by the LRNRD and the irrigators within the District to conserve ground water over the last 10 years follows.

In 2011, LRNRD continued the 9 inches per acre per year allocation for another 5 years, and further established strict limitations on the management of ground water during conditions of drought. In addition, the District set a goal to reduce overall pumping of ground water throughout the District by 25% from the 1998 to 2002 average.

Since 2003, pumping of ground water in the LRNRD has been reduced by 52%. Many factors have contributed to this reduction including the imposition of allocations, no-till farming practices, more efficient irrigation delivery systems, and the use of soil moisture sensors. Since 2005, the District has temporarily or permanently retired over 17,000 acres of irrigated farm ground resulting in a savings of nearly 13,000 acre feet of water per year.

The purchase of the farm in Lincoln County is being funded by an annual $10 per acre occupation tax levied on all irrigated acres (both from ground water and surface water) in the Republican River Basin and within the boundaries of the Twin Platte Natural Resources District.