It's Water-Wise Wednesdays with Frannie the Fish! {The Water Cycle: Part 5 - Evaporation}

Welcome back to Frannie’s deep dive into the water cycle! The dark blue bead on Frannie’s water cycle bracelet represents evaporation. Evaporation is the process of a liquid being heated up until it turns into gas. As Frannie described before, we can actually see the process of evaporation happen when we hold a cup of hot chocolate and see the steam rising from the cup. On a larger scale, when the sun heats up surface water, some of the water molecules on the very top layer turn into gas and rise into the air.

Evaporation doesn’t just happen in surface water, though. Soil moisture is an important measurement in agriculture and environmental science. Plants draw moisture up from the ground to use in photosynthesis and water vapor and oxygen are released from plant leaves as by-products of that process. Water that is released from plants is called transpiration. 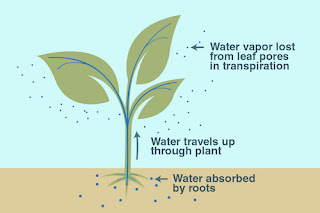 There is still another way that water can move from the ground into the sky. When Frannie learned about glaciers and their role in the water cycle during her deep dive in surface water, she also learned about a process called sublimation. Sublimation is when a solid becomes a gas, totally skipping the liquid phase and it occurs at low air temperatures and pressures. 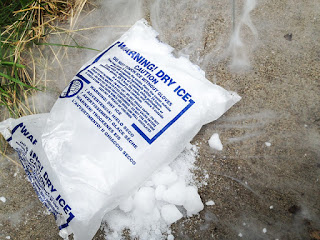 We can easily see the progress of sublimation if we look at dry ice. Dry ice is solid carbon dioxide, which wants to be in its gaseous state at our normal air temperature and pressure. If Frannie wears gloves and carefully places a small chunk of dry ice in a cup and leaves it out in a room, she will notice that it gets smaller after a few hours even though there is no liquid carbon dioxide in the cup.

Glaciers that are located high up in the mountains can do the same thing as dry ice, but it takes a lot longer. They slowly reduce in size through a combination of sublimation and melting then evaporation. Together, scientists describe the process of glacier volume loss as ablation.

Join Frannie in the clouds next time as she explores condensation and water’s amazing property of adhesion!

Posted by The Groundwater Foundation at 5:45 PM