It's Water-Wise Wednesdays with Frannie the Fish! {The Water Cycle: Part 3 - Discharge}

Welcome back to Frannie’s deep dive into the water cycle! Today’s focus is discharge, represented by the black bead on her bracelet. Discharge is simply groundwater moving out of the ground into another stage of the hydrologic cycle.

Plants also take a small part in the discharge stage of the water cycle.  Plants draw water up through their roots using water’s gravity-defying superpower of capillary action.  This process is called plant uptake.  Water is drawn up through the stems, stalks, branches, and trunks of the plants to reach the leaves where it is needed to help the plant make its own food in photosynthesis. 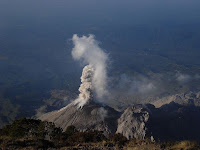 One of the coolest things Frannie discovered during her research on the water cycle surrounds something called subduction. Subduction is actually part of the recharge process, which Frannie will revisit later with her blog on recharge, and is a part of how mountains and volcanoes form. When the water gets heated up by the earth’s mantle, it turns into a vapor and becomes highly pressurized.  Volcanoes will sometimes vent this vapor or, in massive eruptions, push magma and ash high into the sky with from the force of the pressure.

Join Frannie on the next stop on her journey – surface water! See you then!

Posted by The Groundwater Foundation at 3:33 PM