It's Water-Wise Wednesdays with Frannie the Fish! {The Water Cycle: Part 2 - Groundwater} 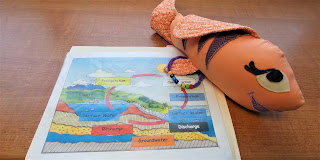 Groundwater is the water beneath the surface of the ground that fills the spaces in the soil and gravel.  An aquifer is a collection of groundwater that’s held within a permeable layer of rock, sand, or gravel.  Aquifers can lie a few feet below the ground and be recharged with rain and floodwaters (Frannie learned that these are called unconfined aquifers) or be hundreds or thousands of feet inside the earth, trapped for hundreds of years beneath an impermeable layer like shale (confined aquifers).

Aquifer storage capacity is the amount of water that an aquifer’s material can hold when it’s totally full. When an area experiences a lot of long, severe droughts and the sands, soils, and gravel settle, an aquifer can lose its ability to hold as much water as it once could.  Reread the “Seeing an Aquifer from Space” blog Frannie wrote a few weeks ago for a quick refresher on storage capacity and storage capacity loss. 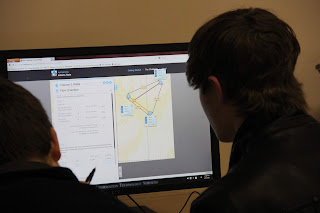 These time of travel calculations are very useful to hydrogeologists when they need to predict how quickly groundwater will move and where it’s going.  Flow direction and time of travel can be affected by many things, including different points of discharge, which just happens to be the next bead on the bracelet!

Next time, Frannie will talk about different kinds of discharge and share the really cool connection between groundwater and volcanoes. See you then! 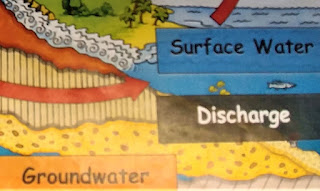 Posted by The Groundwater Foundation at 5:15 PM