The City of Auburn, population 3,000, is located in southeast Nebraska, near the Little Nemaha River, approximately seven miles upstream of its confluence with the Missouri River. The City receives its drinking water from a wellfield located east of the community within an alluvial aquifer along the Little Nemaha River. The wellfield consists of 11 vertical wells averaging 45 to 50 feet below the ground's surface, pumping up to 150 million gallons per year. The source water area also includes multiple small perennial tributaries, which provide recharge to the aquifer, and are therefore hydrologically connected to the alluvial aquifer. 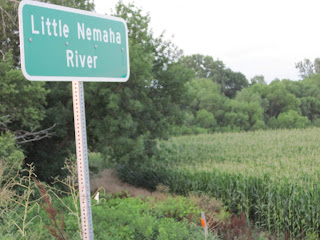 This connection has resulted in several unique water management challenges for the Auburn Board of Public Works (BPW), which is responsible for managing the community’s water system. This hydrologic connection resulted in a 2008 determination by the Nebraska Department of Health and Human Services that the water system is a “groundwater system under the influence of surface water.” Only 12 water systems in Nebraska (out of 602) carry this designation, which requires a higher level of water treatment. As a result, the BPW started construction of a new water treatment plan in 2009 which went online in 2011.

In order to better manage this unique resource, the BPW developed the Auburn Drinking Water Protection Management Plan (DWPMP) to guide decision-makers towards their goal of providing a long-term, safe, and reliable source of drinking water. The plan was approved by the Nebraska Department of Environmental Quality (NDEQ) and U.S. Environmental Protection Agency Region VII in July 2018, making Auburn the first municipality in the United States with an approved DWPMP.

The idea behind the DWPMP began in 2014 by the NDEQ Source Water Protection Program. NDEQ staff worked with U.S. EPA Region VII to recognize the hydrologic connection between surface water and groundwater. Historically, EPA has only focused funds towards protecting surface water quality; however, by recognizing this hydrologic connection and the risks to groundwater from nonpoint source pollution, NDEQ has opened the door to funding additional opportunities. NDEQ can now allow communities with an approved DWPMP to use funding from the Nonpoint Source Management Program 319 Funds to implement projects and programs to safeguard a groundwater-based drinking water source. Auburn’s DWPMP focuses on improving the water quality within the perennial streams that recharge the alluvial aquifer where Auburn’s wells are located. 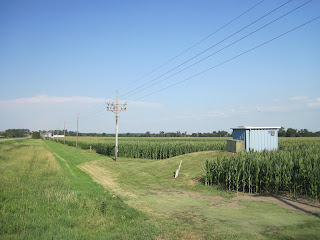 A hydrologically connected aquifer requires a unique methodology to identify and delineate the wellhead protection area (WHPA). The former WHPA was updated to include a "conjunctive delineation" which identifies an area from which surface water may contribute to the groundwater reaching a well. Auburn’s conjunctive WHPA now includes the watersheds of the locally contributing tributaries, and a small portion of the Little Nemaha River watershed upgradient of the wellfield. This allows for holistic management and protection of both surface and groundwater resources. The new WHPA is 51,400 acres, one of the largest in Nebraska, and the first to be officially designated a conjunctive delineation by NDEQ. 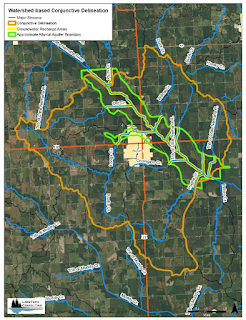 Another key plan recommendation, currently under design by JEO Consulting Group, Inc., is exploring the use of artificial groundwater recharge (AGR) to increase the storage capacity of the aquifer. This could increase the quantity of water available to Auburn’s wells, build resistance to drought, and create a more sustainable and resilient water system. Structures used to achieve AGR will also improve streambank stabilization, improve water quality, and improve aquatic habitat. AGR structures include in-stream grade control, low-head weirs, or similar structures which raise the surface level of the tributaries, thereby increasing storage in the aquifer. An existing 19-acre borrow pit immediately north Auburn is another target for AGR, by pumping water from a local tributary into the pit and allowing it to seep into the aquifer.

The DWPMP is a shining example of collaboration between Auburn BPW, Nemaha NRD, NDEQ, agricultural producers, and citizens. The Auburn community and agricultural producers will benefit from the plan and its future actions with safe drinking water, improved soil health, reduced erosion, and improved water quality for years to come.
__________

Jonathan Mohr is a Senior Environmental Planner at JEO Consulting Group, Inc. in Lincoln, Nebraska. Reach him at jmohr@jeo.com. David Hunter is the General Manager for the Auburn, Nebraska Board of Public Works. Reach him at dhunter@auburnbpw.com.

Posted by The Groundwater Foundation at 4:26 PM