This is the second of a three part series exploring pollution in the stream near Frannie's home. Join her on her adventure downstream to see what happens or go back to read the first part of her journey.

As Frannie was continuing her adventure, she started to notice that the river had a salty taste.

Add the fourth item to the bowl – road salt: Pour in some salt. 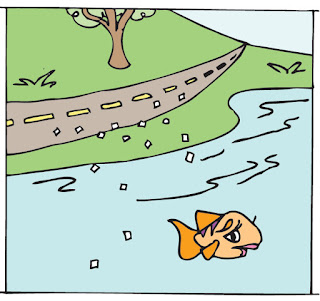 Frannie began to swim faster to escape the salt.

Downstream, Frannie passed a picnic site. Someone left their trash behind. Right then, a big gust of wind came and pushed most of the trash right into the stream. Frannie didn’t like this mess at all! Frannie tried to push the litter out of the stream but couldn’t get it all with her little fins.

Add the fifth item to the bowl – litter: Add the paper into the bowl. 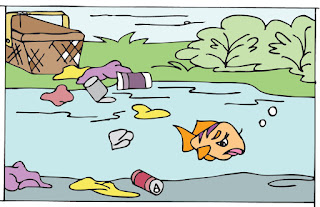 She continued to swim downstream, determined to continue her adventure.

Frannie heard a lot of commotion up on the bank of the stream. She peeked out of the water and saw an overturned oil truck. Some of the oil from the truck had spilled into the stream! If Frannie’s gills ever got clogged up with oil, she would have trouble breathing.

Add the sixth item to the bowl – oil: Pour in the vegetable oil. 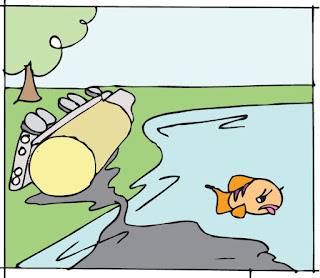 As Frannie continued to swim away from the oil spill, she noticed storm clouds overhead. The rain that began to fall into the stream from the storm clouds wasn’t clean water. Frannie’s scales begin to itch!

Add the seventh item to the bowl – acid rain: Pour in the vinegar. 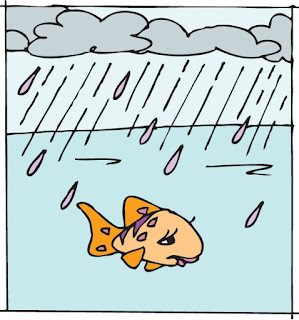 Frannie passed a leaky, rusty old barrel. An unknown substance was leaking out. Unbeknownst to her, an old factory had dumped the tank into the river many years ago. But now the barrel was leaking. As Frannie swims by, she takes in a gulp of water.
Add the eighth item to the bowl – leaky storage tank: Add in a small container with a cracked lid, filled with colored water. 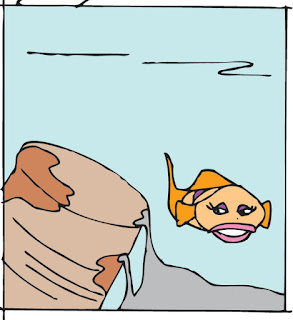 Check back to see how Frannie's journey ends!
Posted by The Groundwater Foundation at 4:00 PM