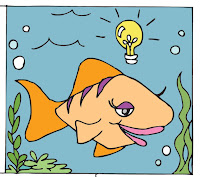 Frannie and her friends need cool, clear streams to live in. A while ago, Frannie explored a local creek.  The story of her adventure is a good visual activity to learn how different sources of pollution can affect a clear stream and eventually make it unsuitable for wildlife such as fish.

For this activity, you will need:

• A fishing lure to represent Frannie - one that looks like a fish, with hooks removed, preferably weighted or sinking lure that is colorful. Frannie is on a fishing line suspended in a gallon jug or fish bowl of clear water.

• Gravel for the bottom of the bowl/aquarium (optional)


One day, Frannie left her shady, cool pool and headed downstream on an adventure.

After a little while, Frannie noticed that the sun was shining and the stream was no longer as cool and dark. She looked out of the water and noticed that all the trees had been cut down and sediment from the banks was washing into the water.

Add the first item to the bowl – sediment: Sprinkle some soil over the water and allow it to slowly settle over Frannie. 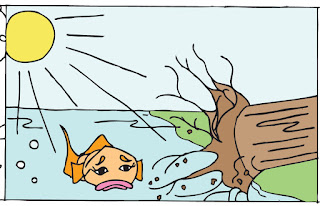 After a while Frannie poked her nose out of the water and do you know what she saw? Big black and white animals coming down to visit her. Cows! As they walked in the water they stirred up mud and left some smelly “presents.”

Add the second item to the bowl – manure: Sprinkle some raisins or cereal and let them sink in the water. 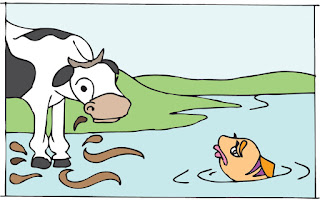 Frannie continued to swim downstream and passed some cornfields, but was no longer feeling very well. 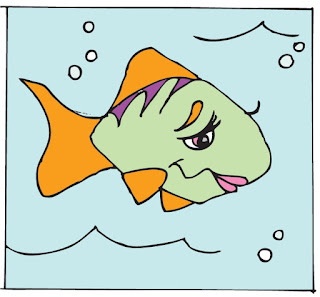 Check back to see how Frannie's adventure continues!
Posted by The Groundwater Foundation at 4:30 PM