The spotlight is on Nebraska as the EPA recently approved the Bazile Groundwater Management Area (BGMA) Plan. The BGMA Plan is the first groundwater focused plan in the nation to address nonpoint source pollution. The plan is the result of a collaborative effort to reduce groundwater nitrate contamination between the Nebraska Department of Environmental Quality (NDEQ) and four of Nebraska’s Natural Resources Districts (NRDs): Lewis and Clark, Lower Elkhorn, Lower Niobrara, and the Upper Elkhorn. The approval of this plan provides NRDs, Communities, and other Public Water Systems (PWS) an innovative framework to build upon, and new funding sources to protect the BGMA Wellhead Protection (WHP) Areas, as well as WHP Areas across the state.

The BGMA covers 756 square miles in northeast Nebraska and is home to 10 communities and over 7,000 residents (see Figure 1). Groundwater in the BGMA is the only drinking water source for communities and rural residents. Extensive row crop and sandy soils have allowed nitrate from land applied manure and commercial fertilizer to leach into the groundwater. The NRDs have collected data on groundwater nitrate concentrations since 1980. During that time, average nitrate concentrations have increased with some areas exceeding 30 mg/L, three times the levels safe for drinking water.

The plan focuses on reducing groundwater nitrate levels below 10 mg/L by progressively adopting more protective Best Management Practices (BMPs) throughout the BGMA. Community Wellhead Protection Areas are listed as the highest project funding priority. The NRDs will utilize a combination of agricultural BMPs required by elevated Groundwater Management plan phases, and voluntary BMPs outlined in the BGMA plan that go above and beyond phase requirements. Through the development of the BGMA Plan, the NRDs have created a cohesive strategy to monitor nitrate reductions in groundwater as fertilizer practices and irrigation methods are improved in the area. This monitoring data will also further refine future versions of the BGMA plan to ensure its goals are achieved.

To truly understand the significance of this plan, one must understand the history of water laws in Nebraska as well as at the federal level. In the past, groundwater and surface water were thought to be two separate water sources and were therefore regulated by separate water laws. At the federal level, the Clean Water Act (CWA) of 1972 charged the US EPA to regulate point source pollution to surface water. While the CWA began to successfully reduce point source contamination, it failed to effectively address nonpoint source contamination. In 1987, the CWA was amended, and the Section 319 Nonpoint Source Management Program was established to improve federal leadership and support, and focus local efforts on voluntarily reducing nonpoint source contamination (EPA 2016). Even with the 1987 amendment, the CWA act did not directly speak to groundwater, leaving management of groundwater resources to the states. Nebraska has been managing and regulating groundwater resources through the NRDs since the mid ‘70s. However, the hydrologic connection between surface and groundwater wasn’t legally recognized until 1996.This acknowledgement has led Nebraska to collaborative efforts that address nonpoint source contamination from a different perspective than what is generally found at the federal level.

The BGMA plan is the first EPA approved plan in the nation to address nonpoint source groundwater quality problems using the Clean Water Act. This is a milestone for communities who have struggled to obtain funding for projects that seek to educate and inform residents and local producers; and implement BMPs targeted at reducing nonpoint source groundwater pollution in their Wellhead Protection Areas. Until now, CWA Section 319 funding was only used on projects that address impairments in surface water or in areas that were listed as priority areas in a NRD’s watershed management plan. While more and more WHP areas are being targeted in watershed management plans, the BGMA plan is the first to address it from the standpoint of groundwater and to make WHP areas a priority for project funding.

Nebraska is unique in that approximately 88% of the state’s residents, and nearly all rural residents, primary source of drinking water comes from groundwater (NDEQ 2015). The geology, hydrology, and depth to groundwater determine how susceptible groundwater aquifers are to contamination. For example, sandy soils, little or no protective surface layers (i.e. clay or glacial till), and/or high groundwater tables leave drinking water aquifers especially vulnerable to point and nonpoint source contamination. The rate of groundwater movement ranges from inches per year(s) to inches per decade(s) compared to surface water which moves inches per day(s) to week(s) to enter surface waterbodies.

Nonpoint source groundwater nitrate contamination is one of the most prevalent nonpoint source contaminants in Nebraska. It puts a heavy financial burden on communities and their Public Water Systems, as the only way to remove nitrate from drinking water is through treatment. In the last 20 years, five PWS and landowners with private wells in the BGMA have spent over $9 million dollars on treatment (see Table 1). This amount includes the cost of facility operations and maintenance (O&M) and point of use (POU) treatment systems for domestic well owners. Ultimately, the cost of treatment and O&M falls on the 4,201 residents that reside in the five affected communities and land owners in the surrounding area. In the future, the cost of treatment will only increase if the source of contamination is not addressed (NDEQ 2016). Nitrate contamination is prevalent throughout Nebraska and many other communities are dealing with the same problems as those in the BGMA (see Figure 2). This is just one example of why the work that has been done and will continue to be done in the BGMA is so important. Hopefully, the plan will pave the way for many other NRDs and communities to better respond to and manage nonpoint source contamination, especially in WHP areas.

The approval of the BGMA plan by the EPA has provided an entirely new source of funding that wasn’t previously available for groundwater and drinking water protection efforts. Since the creation of Nebraska’s voluntary Wellhead Protection Program, communities and PWS across the state have had the ability to create WHP protection plans to protect their drinking water sources. These plans identify possible sources of contamination in the WHP area and lay out management strategies to address sources of contaminants. The ultimate goal is to implement on-the-ground activities such as BMPs and education and outreach programs. More often than not this goal falls short as no direct funding is available to communities. Many communities do not have the time, support, education, or money needed to develop and implement effective WHP plans. Until now, the only financial assistance NDEQ has been able to give communities who wish to protect their drinking water sources are Source Water Protection (SWP) Grants. The grant program distributes up to $100,000 a year, which generally isn’t enough to fund multiple larger more involved projects. The SWP Grant has been limited in its ability to support long-term efforts to reduce nonpoint source contamination. The NDEQ is hopeful that communities will be able to better protect their drinking water sources through CWA Section 319 funding.

The BGMA plan approval by the EPA has also led to new activities for the SWP Grant to fund. As stated previously, the BGMA plan is the first in the nation to focus on ground water instead of surface water. Because most Nebraska communities use groundwater as a source for their drinking water, those communities were not included in earlier watershed management plans nor were they eligible for funding on their own. In response to the EPA approval of the BGWMA plan, the NDEQ is working with communities and the EPA to develop Drinking Water Protection Management (DWPM) Plans. These plans will be similar to the BGMA plan in that they will primarily be groundwater focused plans that specifically target WHP areas. These plans will: 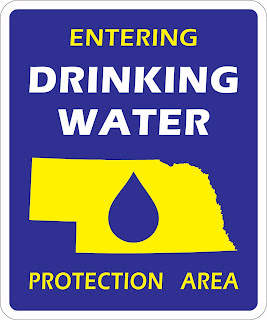 Currently three Nebraska communities are in the process of developing DWPM plans. Two through the 2016 SWP Grant and one proposed project that will combine available 319 planning money and other grant sources. The ability to independently qualify for 319 project funding would provide a much needed funding stream to the many struggling communities in Nebraska. These new opportunities would not be possible without the innovative work that was done on the BGMA plan. The NDEQ looks forward to working with Nebraska communities to protect and improve their drinking water.

A special thanks to the BGMA stakeholders and the many individuals from various local, state, and federal organizations for their contributions to the development of this plan.