The Scavenger Hunt consisted of 17 companies or organizations who supported the Groundwater Foundation by donating money to help Frannie and Foundation staff do education and outreach activities. 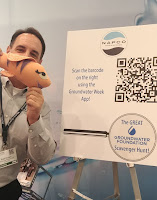 Then she dashed around to say hello to Cotey Chemical Corp, GEFCO, and Wyo-Ben. Wyo-Ben also donated an item to the Groundwater Foundation's silent auction fundraiser! 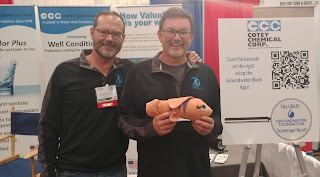 Next door on aisle 4, Frannie met representatives from International Pipe and National Driller. 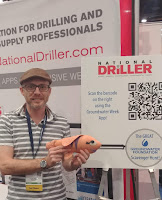 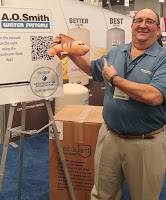 She ran into some old friends at the Water Systems Council booth, who have happily supported the Foundation's education efforts for a long time.

Frannie is sorry that she missed the folks at Cascadian Water and Sun-Star Electric, Inc, but hopes to see them at Groundwater Week next year! 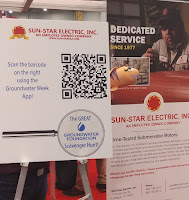 Frannie skipped a couple aisle to get to aisle 9, where she met friends from Simmons Manufacturing and Mount Sopris.

Frannie was getting kind of tired from swimming all over the exhibit hall, so she was happy to stop by and rest awhile at the CSI Water Treatment Systems booth.

At the far end of the hall, a nice representative from Milspec Industries welcomed Frannie and the Groundwater Foundation booth for a quick photo-op just before dinner.